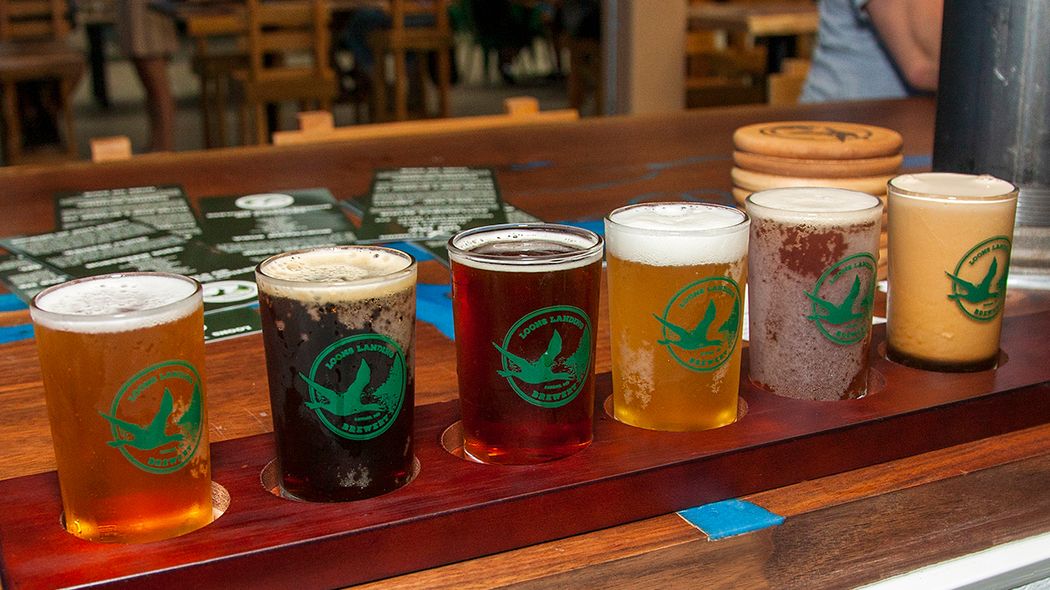 Beer! A wise man once said that beer makes you feel the way you oughta feel without beer.
- Wilhelm Rodman, "Brews Brothers"

All of our beers are designed by hand by our founders. Each batch has been crafted with the utmost care and attention to detail. Below, you will find descriptions of each of our current beers, along with tasting notes. 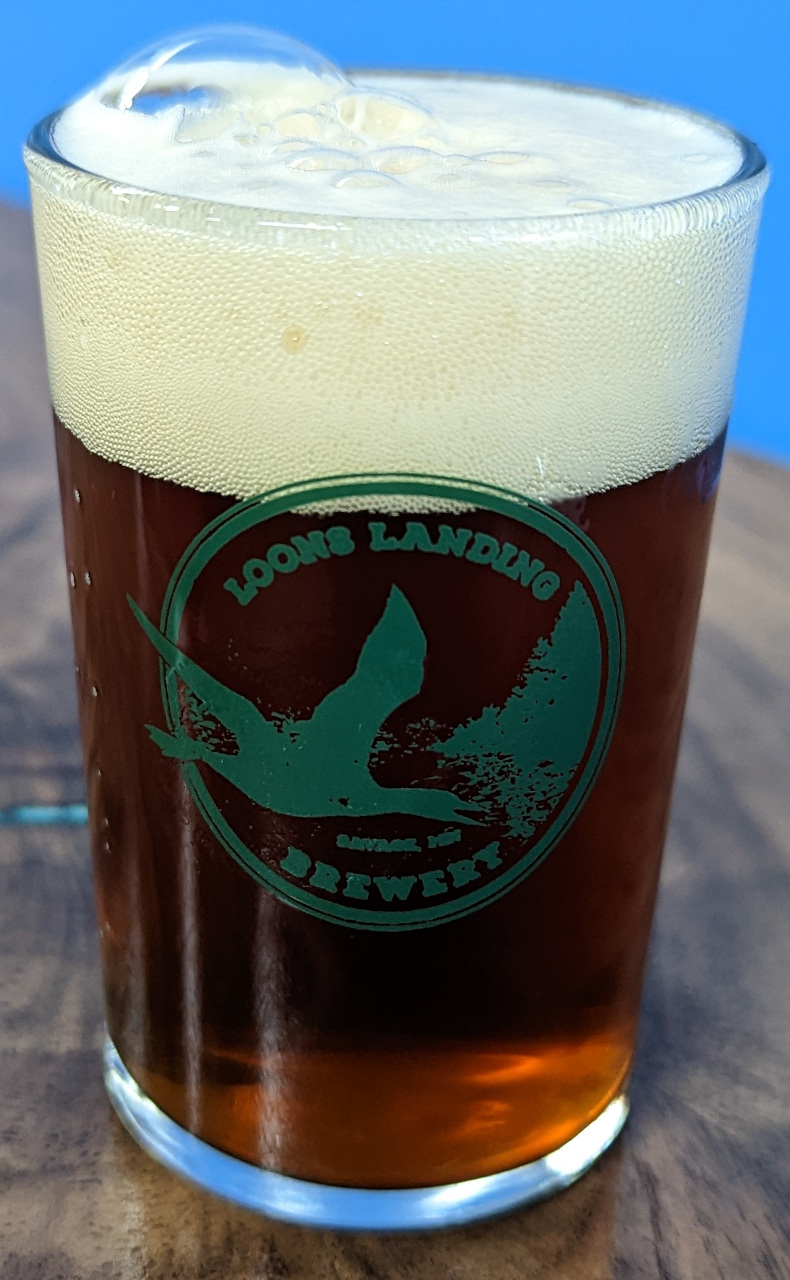 In days of old, sailors (and pirates) mixed rum with their water to preserve the freshness in times before refrigeration. This mixture was called "grog". Unfortunately, scurvy, a condition caused by lack of Vitamin C, was still a problem.

Loons Landing humbly offers all would-be pirates our rendition of an India Pale Ale. It uses a large amount of Citra hops to provide a citrus-forward aroma and flavor and finishes with notes of passionfruit and tangerine. Now you can look forward to a scurvy-free trip of swashbuckling and looting! (Legal Note: Anti-Scurvy Elixir contains no Vitamin C. Do not use it to treat scurvy). 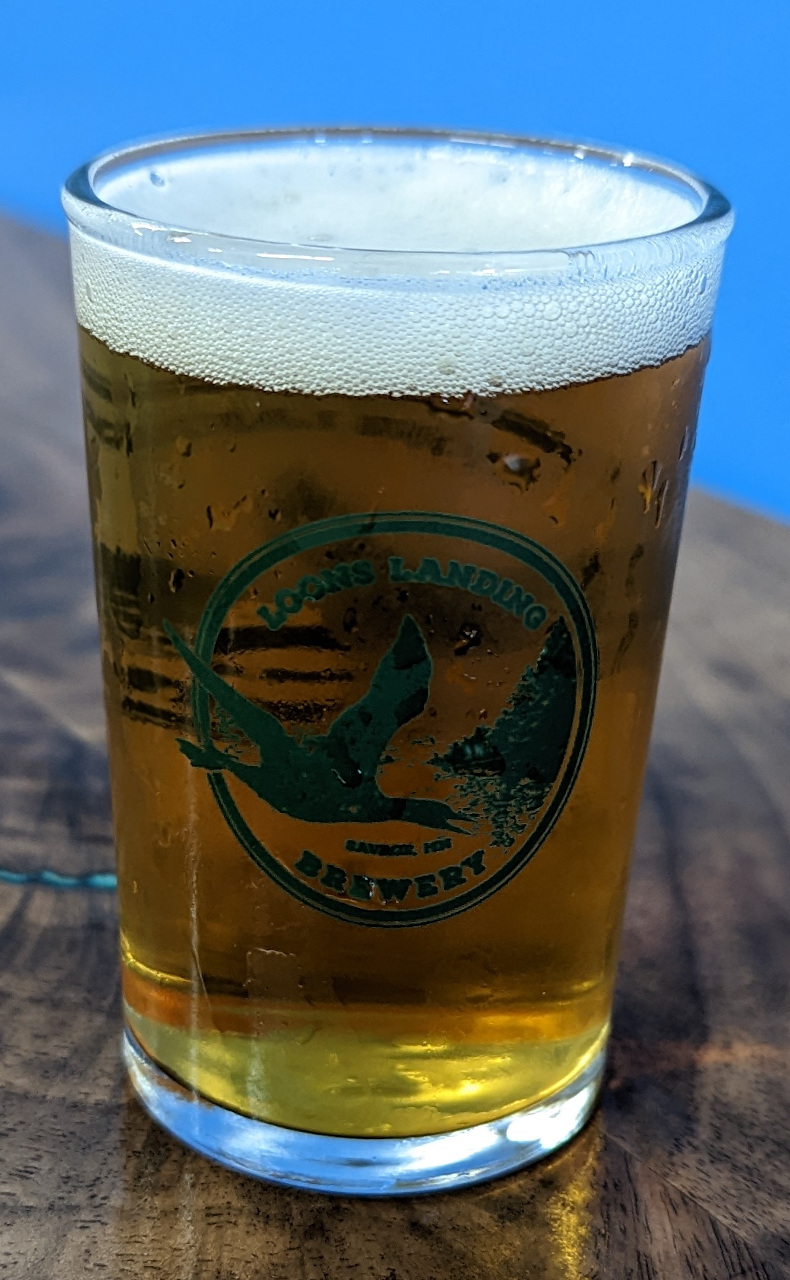 A sweet, tangy ode to the last days of summer and the arrival of the crisp fall months. With a bit of a citrus bite from actual orange peel, rather than citrus hops, this blonde ale is, like its counterpart in women, a class act with a lot to be enraptured by and little to dislike. Its golden hue at the top of the glass, transitioning to darker as you look down toward the base, this beer reminds us that summer is fleeting, and autumn will be here before you know it - but that that's not necessarily a bad thing. 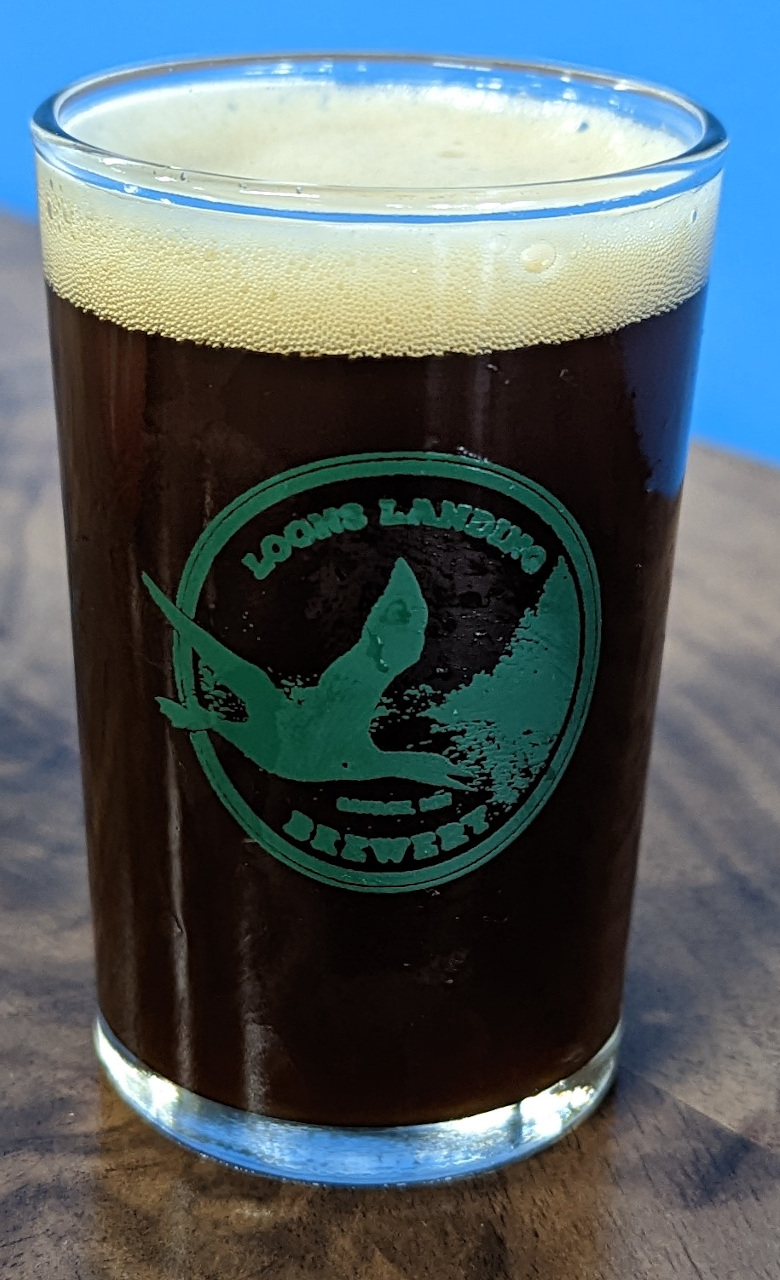 A nutty, full-bodied embodiment (pun intended) of the original British Brown Ale category. With hints of cocoa and caramel on the tongue in an aftertaste, this ale is a delicious, easy-drinking winter warmer or summer afternoon meal replacement. 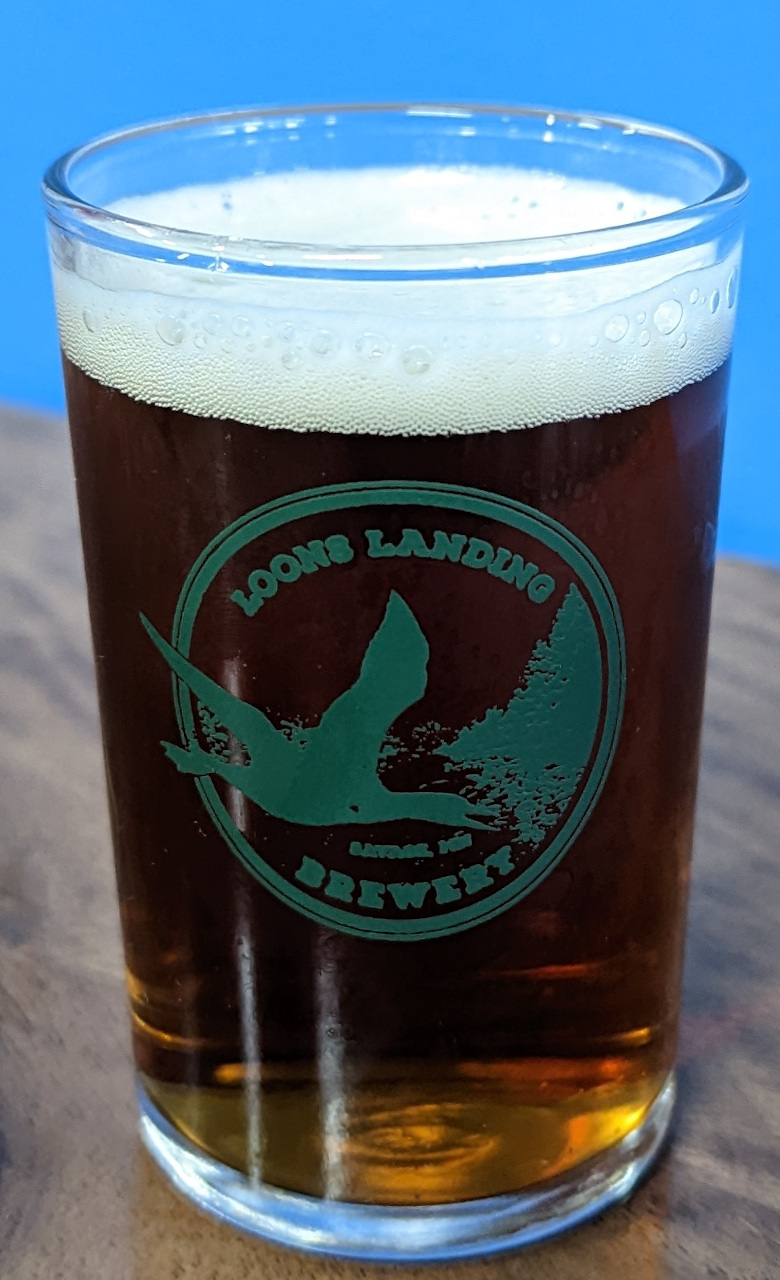 A beer brewed in the style of an Irish Red ale, minus the color of a traditional red (an Irish gold?). This beer was originally a batch of Red Sunset, but the wrong grain was added to the mash accidentally. This ale is a light and bready summer session beer with slight caramel notes and a finish similar to a light English bitter.

A pale, bright, refreshing Plzeň-style lager. The Pilsen malt is distinct within each sip with complex features. Balanced well with traditional Saaz and Tettnager hops for a bitter, but not overly harsh, finish.

The term "steam" as a euphemism for beer originated on the West Coast during the 1800s, presumably from the way the fermentors were left open in the cool air of San Francisco, giving off small amounts of water vapor during fermentation. Our version of "steam" is an amber-colored ale with a distinctly fruity aroma. The flavor starts dry and opens up with notes of fruit, caramel, and biscuit. Brewed with West Coast hops, Ironclad is a nod to our colleagues out West. It has less alcohol content so you can enjoy a few of them during a single session without getting too intoxicated.

A Vienna-style lager brewed in the style that became famous in the city of Boston. An amber-colored lager with a malty start that finishes relatively dry and clean. Notes of bread, toastiness, and biscuit from high-quality malts give this beer its signature flavor.

A blend of chocolate malt and roasted barley with cacao nibs offers a deliciously creamy and satisfying brew for lovers of chocolate. This is served on nitrogen to accentuate the subtle chocolate notes and give a satiny-smooth mouthfeel. Balanced with a mixture of hops to offer an earthy-sweet and slightly spicy flavor profile. This is sure to delight any Mesozoic-era reptile.

A cream ale with significant sweet notes from both malt and maize. Brewed as an ale, this light-bodied, straw-colored beer has more in common with traditional American lagers than with its ale cousins. A refreshing and delicious taste, with just a hint of hop flavor to keep you from floating away as you sip it.

A fruit beer with blueberries added during fermentation. This beer has a cream ale base, so there is a significant sweetness from the base beer style that transfers through to this variant. The blueberries add a tartness when fermented, giving this ale an almost sparkling fruit juice quality to it. The hops balance the package to produce a refreshing summer ale.

A traditional German Kölsch, brewed with noble hops: Saaz and Tettnang. This has a fruity, apple-like quality to the aroma. It stands with a bright, clear, straw-like color and a long-lasting, bright white head. The White Wheat used in the mash brings a full-flavored, soft sweetness to the malt flavor. The subtle balancing of hops makes this beer light, refreshing, and easy to drink.

Our original, award-winning imperial stout. A creamy, black-colored stout with coffee, toffee, bread, and cherry notes hidden in the complexities of its dark recesses. Come bring your tastebuds back to the age of the Tsars - За нашу дружбy! (To our friendship)

A balanced, easy-drinking ale slightly malt-balanced. Designed specifically for springtime, the St. Patrick's Day holiday, and March hockey tournaments. It has a distinct biscuity flavor, with a smooth, dry finish.

A lighter-weight English-style porter with a smoky aftertaste. Unlike its American counterparts, the English Porter is less hoppy and more malt-forward. Carbonated and served on nitrogen, this ale has a creamy consistency one would expect from higher-gravity stouts, without the high alcohol content. The initial smoke flavor gives way to creaminess from the sweetness of the malt and the nitrogen in solution, followed by subtle flavors of cocoa, slight bitterness from the hops, and possibly a hint of fruit.

A dark, wine-like, aged beer designed to be sipped like a fine cognac. This barleywine is aged for at least two years in small, 2-liter barrels, giving it the equivalence to 8+ years of aging in a normal 30-gallon oak barrel. A silky-smooth drinking experience, you will notice a significant cherry aftertaste co-mingling with the malty sweetness. With an oak-y finish, coupled with just a hint of spice, this beer pairs well with a thick steak or after a holiday dinner.

As this is one of our rarest and most labor-intensive beers, it is only brewed once per year, and offered in 750ml bottles. It is sold in a priority-order, with our VIP members having first opportunity to purchase the limited quantities. We also offer 1L barrels in which it was aged, should you want to continue aging it yourself.